Everyone has a passion. Bob’s passion is riding his bike and he prefers to ride it in Kyrgyzstan of all places. Kyrgyzstan is a Central Asian country of incredible natural beauty and proud nomadic traditions. It was annexed by Russia in 1864 and it achieved independence from the Soviet Union in 1991. Time to ask Bob some questions about this unknown country to many travellers.

You obviously have a deep love for Central Asia, especially Kyrgyzstan. It’s like your second home. Why is this country so appealing to you?
Yes it does seem like a second home but it was surprising to note that my recent visit was in fact only the third time I had been there! However, I have plenty of contact and visits from Kyrgyz people living, studying or visiting Europe. And I have almost daily contact with people in Kyrgyzstan. Me and my wife also help out a various travel fairs in The Netherlands and Belgium promoting Kyrgyzstan. I also write blogs and columns which were originally intended for Kyrgyz students and teachers. But I must say from the moment I arrived it seemed the right place to be.

Why do you think people should visit Kyrgyzstan and which part of the country should they explore?
The appeal. A young, new, fairly unknown nation full of wonderful unspoiled nature and
open hospitable friendly people. An ancient Nomadic culture in the cities, an interesting melting-pot of influences (Asian, Russian, West European and American). For the birdwatchers and botanists there is more than enough to see. Everybody says much the same thing. For the amazing and spectacular scenery and the friendly people mostly unspoiled by any form of mass tourism. There is a great divide between the North and South and my visits up to now have been restricted to the Northern part. Even many of my Kyrgyz friends who have visited Europe and other parts of the world have not visited the south. The one place most people want to visit in the south is Osh, because of its association with the silk-road routes. However, leaving aside the northern shores of Lake Issyk-Kul, which is a sort of tourist resort mostly for Kazachs travelling just about anywhere 100km outside of Bishkek you are in a whole new world of mountains, lakes, small villages, semi-nomads and jurt camps.

Are there any travel writers that influence you to travel to that part of the world?
Although I used to be an avid reader I now seldom read books. More often magazines or blogs. I can’t remember any of my travel destinations ever having been directly influenced by a book. However the smallest things can be of influence. The Belgian TV commentary for the Giro and The Tour have led to new destinations. I once visited a city on the strength of a brief background shot in a TV detective film. On the whole I prefer not to know too much about the countries I visit. Some basic practical information and just a little background info about the culture, history and geography is enough. I’d rather discover the rest myself. Oh and I avoid any ‘must see’ places like the plague. Kyrgyzstan first came to my attention through an outdoor sports magazine and it was the smallest of advertisements in a cycling magazine that triggered the memory and led to the first visit. 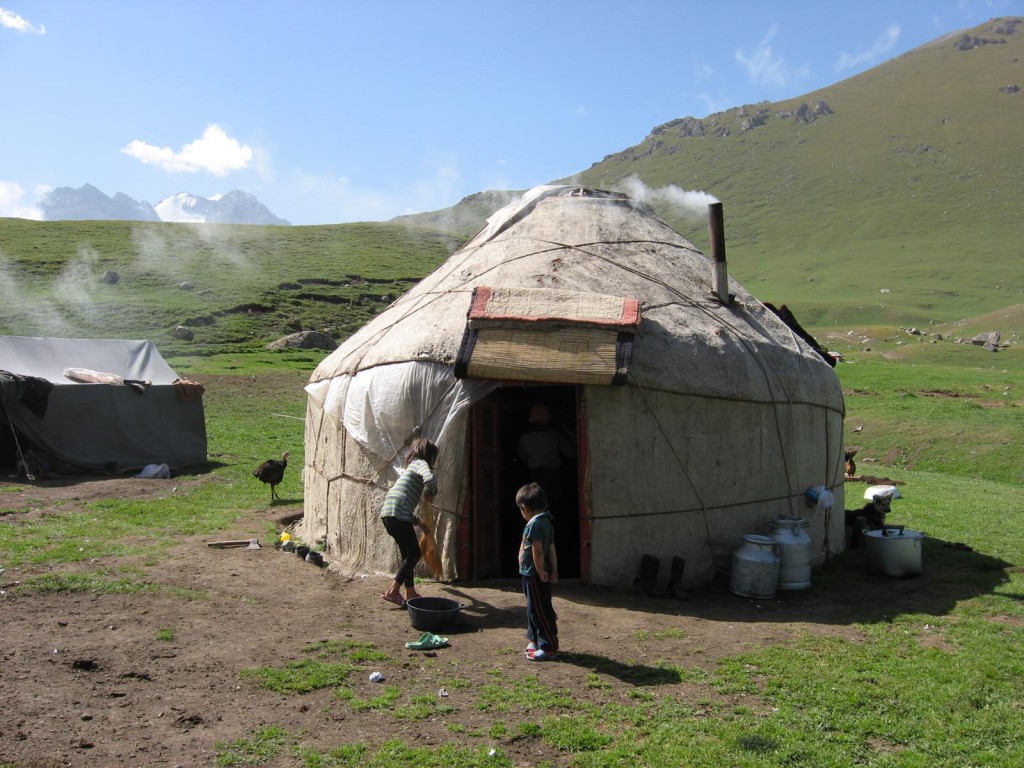 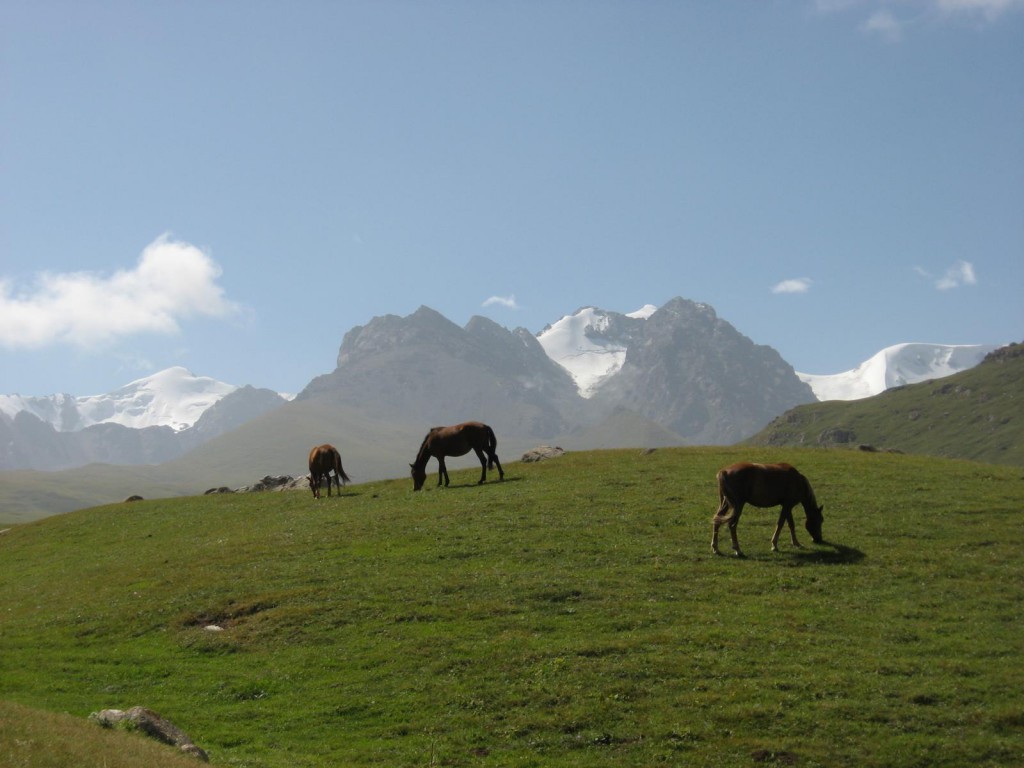 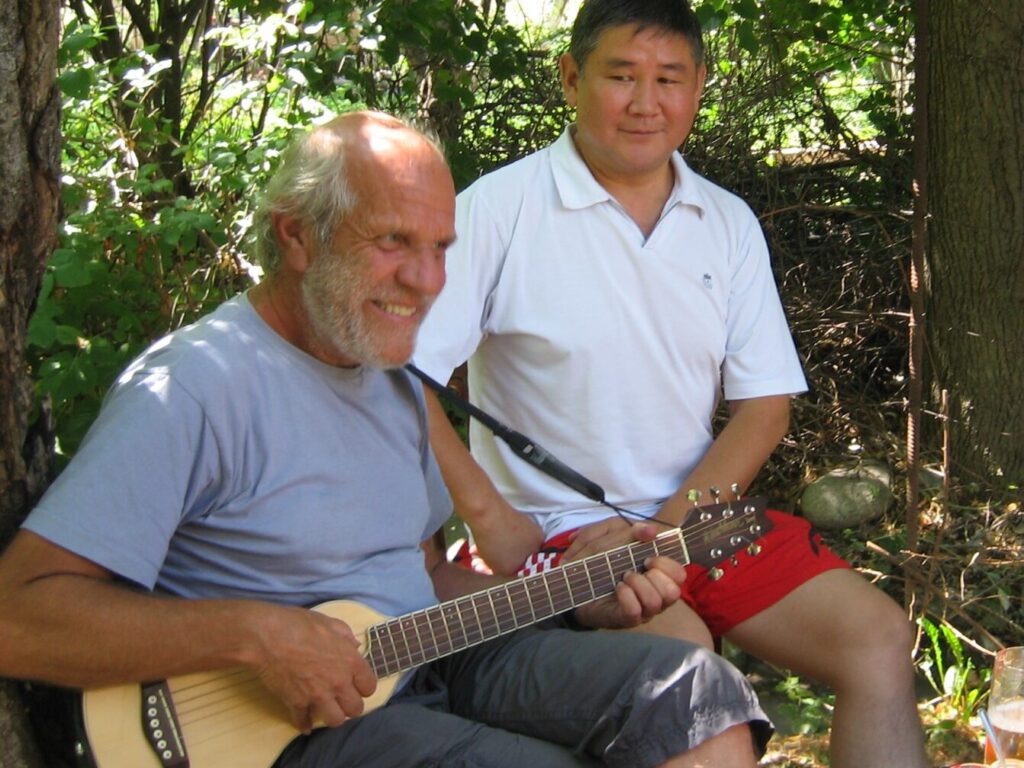 Which five items would you always pack in your suitcase?
Aha…well the one thing that always goes with me doesn’t actually fit into a suitcase. It’s a travel backpackers guitar (standard size neck, small body). I don’t play or sing particularly well but that doesn’t seem to matter, music breaks down all barriers. This instrument has given me and others much pleasure during my travels. It has also been the cause of a few hangovers and unplanned ‘rest days’. Alongside this, one or more jaws (jews) harps, (one of Kyrgyzstans national folk instruments ) which I have learned to play and often creates more interest than the guitar. To make my orchestra complete I take a kazoo and mini maracas. I guess that’s my five. Besides my bagage I nearly always have a mountain bike with me.

Do you have a favorite shoe which you take when your travelling. If so…what kind of shoe is it?
I wouldn’t go anywhere, except a maybe a short city trip, without my Teva sandals.

Can you give some advice or tips for aspiring travellers to Kyrgyzstan?
Kyrgyzstan is a poor, developing country, even a small number of tourist can provide welcome extra income for several families. It is for most travellers visa free. It is a relaxed and safe country to travel…friendly hospitable inhabitants. The food is simple, but good. Many younger people speak English or, to a lesser extent, German. Russian is widely spoken alongside Kyrgyz. Beware of the ‘hospitality trap’ if you are invited for a cup of tea. This involves at least a table full of snacks or possibly a complete meal. Nothing wrong with this as long as you are not in a hurry (Kyrgyz people rarely are). Besides the very main roads the infrastructure is poorly maintained and electricity failures are frequent. All part of the fun. For the individual traveller visiting the website Community Based Tourism (CBT) is a must, they will have nearly all the information you need for any sort of journey in this fascinating country. For organised tours: www.ecotour.kg a Kyrgyz company that makes 100% use of local resources and products.

Two reasons why you shouldn’t visit Kyrgyzstan:
a) because visiting this country can be addictive
b) and mostly because secretly, I want it all for myself.